Alnie G. Foja, the legal counsel of Gabriela Party on Saturday, February 1 asked for explanation and apology from GMA-7 regarding the misleading report on national television and online news about Deniece Cornejo, the woman who filed rape case against the It's Showtime host Vhong Navarro. 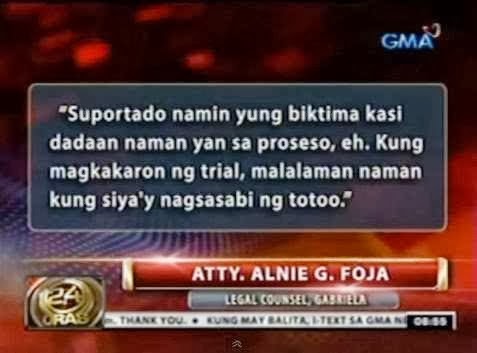 "GABRIELA and GABRIELA WOMEN'S PARTY did not issue any statement in support of Deniece Cornejo.", Foja insisted.

Last Wednesday, GMA7's Sandra Aguinaldo interviewed Foja on RAPE 101 with report aired on 24 Oras the following day. In the statement of Aguinaldo, it implied that the said women’s rights group is supporting Cornejo, a 22 year-old La Salle Antipolo student.

"In that interview, I NEVER stated nor was I asked about Gabriela's support for Deniece. I was made to understand that Sandra was to do a public information segment about rape in general.", Foja said via her Facebook account.

"That GMA7 allowed the publication of an online article stating that Gabriela expresses support for Deniece based on Sandra Aguinaldo's interview of me on RAPE 101 and that 24 Oras quoted my statement while showing footages of Deniece is DELIBERATELY MISLEADING and MALICIOUS. " Foja added.

"I express my regrets that Gabriela and Gabriela Women's Party are dragged into this mess. In the past, I have generously entertained questions from GMA7 reporters even through text messages on legal questions that have nothing to do with my work for Gabriela (I just wanted to help) but what has happened with this interview is so disppointing and traumatic for me. "

As of posting, online article entitled "Gabriela Women's Party expresses support for Cornejo" and another interview with Lorna Kapunan of GMA News Online were already deleted. Likewise, Youtube video was also made private by GMA News.


Here's the open-letter to GMA News and Public Affairs from Gabriela:

We would like to call your attention to an article published online as well as a news report aired over 24 Oras last January 30, 2014 that explicitly stated our group's support for Ms. Deniece Cornejo. We would like to clarify that we issued no such statement.

It has been the long standing policy of Gabriela Women's Party and Gabriela National Alliance NOT to comment on issues that we have no first hand knowledge about. In this specific case between Ms. Deniece Cornejo and Mr. Vhong Navarro, neither parties have sought our assistance or opinion.

We would like to clarify that the interview conducted by your reporter, Ms. Sandra Aguinaldo, focused primarily on the issue of rape, advance questions relayed to me were even titled as "RAPE 101". I was likewise careful not to comment on the controversial case and even told Ms. Aguinaldo that I have not monitored it. The questions propounded to me were about rape and rape victims in general and my answers were made with no reference to any particular victim much less to Deniece. I was asked to explain how rape is committed, its impact and repercussions on the victims, the difficulty of filing cases and how the public should react to the victims' story.

Unfortunately, the interview, I believe was maliciously spun to make it appear that we in Gabriela are supporting Ms. Cornejo. While we appreciate the network's effort of having taken down the article immediately, we are calling for a public apology and a clarification from the network so that the audience may be enlightened on the truth. Moreover, we hope that the network will exercise caution in the treatment of future stories.