A Boeing 737 Plane was hit by Lightning! 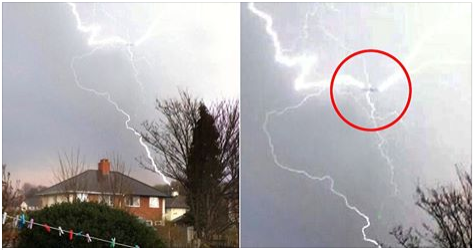 After they landed on the runway, the pilot confirmed to his passengers that the plane was actually been hit, saying simply:


'Ladies and gentlemen, you may have noticed we were hit by lightning.'

'After the bang, my initial thought was the engine had blown-up. Surprisingly, it wasn’t frightening, it was exciting.

'You are waiting for something else to happen, then you realized nothing has gone wrong.'

Image of the plane, caught in the middle of several branches of a lightning bolt, was taken by Tracy Meakin White, 42, who was watching the storm.

She said: 'I didn’t even see the plane at first, I was just clicking on my phone and then afterwards I saw the aircraft.


'I think it is a once in a lifetime picture, I doubt I will see anything like that again, I am not a photographer, it was just a stroke of luck I got the shot.'


A statement from KLM said:


'Occasionally aircraft is hit multiple times by lightning. All pilots and air crew are trained to deal with this.'

A spokesman for Birmingham Airport said: 'All aircraft landed safely without incident.