Finally....Vhong Navarro Back to Its Showtime Replay march 8 2014 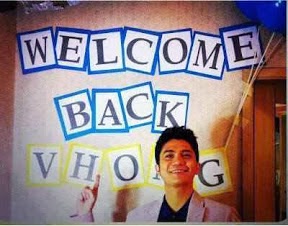 Vhong Navarro is now back at showtime! after a week long of waiting finally he's back, an amazing comeback in the noontime show. In his appearance this Saturday he finally showed and share stories.

He also give thanks to all his fans and friends for supporting him in is fight. His fans are very happy that their idol Vhong Navarro back in Its Showtime to give them laughter.

Vhong Navarro is Back in It's Showtime on March 8, 2014 - You can watch the full video replays in iwantv.com.ph

You can remember what happened to Vhong on January 22, 2014. He was beaten black and blue of unknown personalities, until he speak up about all the details. Vhong was mauled by the group of Cedric Lee because of the rape allegation.