Jessica Shanchez will sing the national anthem for the Pacquiao-Bradley fight. Sanchez has been picked by paquiao to sing in their fight as announce in this weekend. 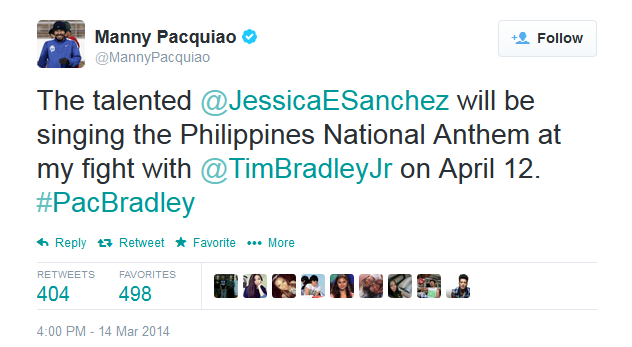 The American Idol runner up first sang on Pacquiao fight during the first Paquiao Bradley fight last June 2012, she sang the American anthem that time. Last year when for Pacquiao-Brandon Rios she was also sang the Philippine national anthem.

According to Sanchez she is very happy that again she was given a chance to sing for the Philippines.

She also stressed that the last time she sang the anthem was good and will stick to the simple and traditional way of singing it.

The fight Pacquiao-Bradley rematch will be happen on 12th April 2014 at the MGM Grand in Las Vegas. You can watch it Sunday here in the Philippines.