COMELEC: Enrile, Jinggoy and Bong can Run in 2016 Election

In the question thrown to Comelec Chairman Sixto Brillantes Jr if Juan Ponce Enrile and Senators Ramon Revilla Jr. and Jinggoy Estrada can still run in the 2016 election. He said that “Everybody is innocent unless there is a final conviction,” and they can still run. The three are charged of plunder in the Sandiganbayan. 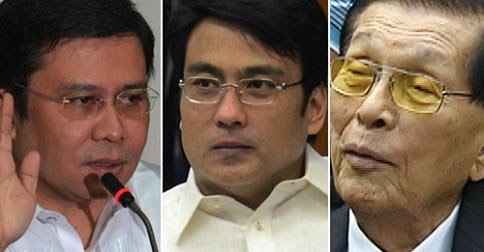 According to Brillantes the disqualification will only come once the three are finally convicted.

“They can still run – and they know that – for any position they want even if they are in jail,”

“I don’t see any problem as long as they are not convicted with finality.”


According to the law to be qualified for Philippine Elective Office are as follows:
Qualification for Philippine President and Vice-President:
1. natural born citizen of the Philippines
2. registered voter
3. able to read and write
4. at least 40 years of age on the day of election
5. resident of the Philippines for at least 10 years immediately preceding the election.

It is already told that Estrada will be running mate of Vice President Binay in election 2016.

Revilla is not confirming any willingness to run for any positions.

Jinggoy Estrada, Juan Ponce Enrile and Bong Revilla are now on their second and last terms at the Senate.