AshikGaval, a boy from a village in India suffered from a rare medical condition and has had 232 teeth surgically removed with 28 still remaining in his mouth.

The boy has been experiencing pain in his right jaw for 18 months before leaving his village and sought treatment in the city. He has been passed on to doctors to doctors but without success on identifying the cause of the problem. His father, Suresh Gavai said he was worried that it might turn out to be cancer so he brought him to the city of Mumbai. 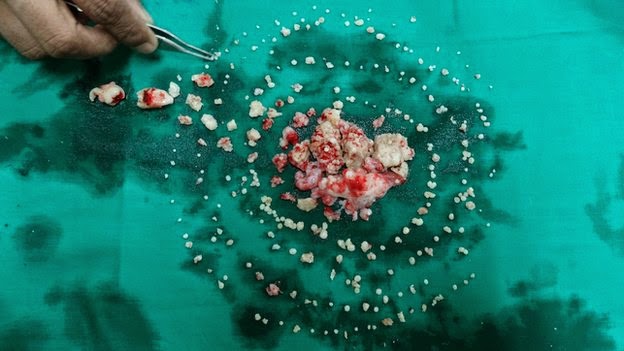 With swollen gums and in pain, the 17-year old was admitted to JJ Hospital in Mumbai, India.

Doctors in India have extracted 232 teeth from the mouth of a 17-year-old boy in a seven-hour operation.

"Ashik's malaise was diagnosed as a complex composite odontoma where a single gum forms lots of teeth. It's a sort of benign tumour," Dr.SunandraDhiware, head of the hospital’s dental department said.

The surgery was conducted on Monday, with a team two surgeons and two assistants trying to treat the boy’s jaw. It was led by Dr. VandanaThorawade who is the head of the hospital’s ENT (ear, nose and throat). At first, they had trouble trying to cut it out so they resorted to using the basic chisel and a hammer to take it out.

She described Ashik’s case as “very rare” and “a world record.” Complex composite odontoma is known to affect the upper jaw and a maxium of 37 teeth have extracted from the tumor in the past, according to medical literature available on the condition. Yet the boy’s case differs: his was found deep in the lower jaw and inside was hundreds of teeth.

Dr. Dhiware has not seen anything similar as Ashik’s case in her 30-year career but she was “thrilled to get such an exciting case”.

It was indeed an unusual case which brought people curious and bewildered even. As for the family, the operation ended with a smile.