Last July 12, 2014, a 3-year-old girl was supposed to be buried by 1:00 pm, until the girl suddenly ‘woke up’ and gained consciousness. Much to the surprise and joy to the family, the parents quickly picked her up, covering her with a blanket. People who were present in the funeral took pictures, amazed in the ‘miracle’. With two men holding two big crosses, everyone proceeded outside, leaving the coffin behind and empty.
(scroll Down for the VIDEO) 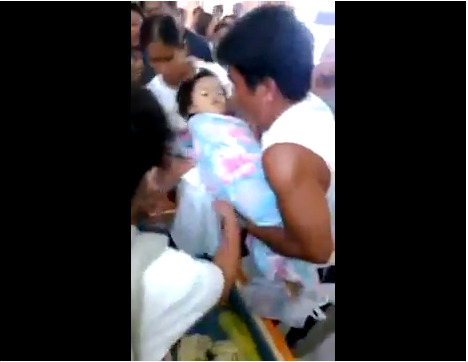 It was already 24 hours since the child was declared dead. As were the customs in their area, Saturday, July 12, the family along with relatives and neighbors went to the church of Aurora, Zamboanga del Sur in order for a priest to administer the last sacrament of the Roman Catholic religion on the girl.

The video on the incident instantly went viral on YouTube and other social networking sites. Although it has been regarded as a miracle by some Filipinos, this incident also received criticisms and unbelief. Others blamed the hospital for not checking on the kid. However, it is still a question if the family did consult a physician before proceeding to the burial. Others, on the other hand, were just glad that the family does not reside in Manila, jokingly saying that if they had been was, morgues will be rushing to them to conduct embalming on the toddler. The cause of death isn’t clear either. People are still waiting to receive statements from the family and the girl herself.


Post by Catherine Romanaso.
News like these might be shocking to some, but there have been quite a number of premature burials recorded in history. There have been 149 tales of being buried alive in the year 1905. One of the most remarkable premature burial was the case of Angelo Hays during 1937 in France who was buried 3 days after he was declared dead.