Home » news » It is FINAL: Palace Decides to Deny Cudia His Diploma

It is FINAL: Palace Decides to Deny Cudia His Diploma


FORT DEL PILAR – Former Philippine Military Cadet Aldrin Jeff Cudia is dismissed from the academy due to an offense against the Honor Code on which the academy referred to as the highest gauge of character based on three offenses: lying, cheating, stealing and tolerating those who do it. It was said that Cudia lied about the reason for his tardiness. So despite of his academic excellence, being the salutatorian of his class and being the third on his batch, he won’t be able to graduate. 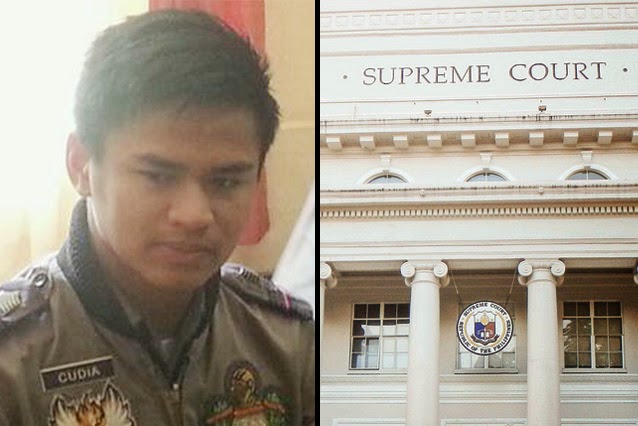 With a vote of 8-1 which was later turned into 9-0 of the Honor committee, also composed of cadets- a unanimous decision was required to dismiss a cadet from the academy.

"Lying that is giving statement that perverts the truth in his written appeal, stating that his 4th period class ended at 1500H that made him late in the succeeding class,” was written in the Honor Code report.

The verdict on the former Philippine Military cadet was found harsh by some, however, in an interview with radio station DZBB, Major Agnes Lynette Flores, PMA public affairs office chief stated that Cudia has been accused of committing two other violations in his final year, both regarding alleged cheating.

"This is the third instance he was charged in an honor violation. The first two were cheating violation. I can't divulge that case because it is confidential," she continued, “However, that the first two charges of cheating were dismissed after a preliminary investigation.”

Cudia, on his defense, has filed cases to the Commission on Human Rights (CHR) and to the Supreme Court. However, despite that the CHR has found Cudia not guilty of the offenses in the Academy requesting that he should be issued a diploma certifying the cadet has finished Bachelor of Science in the academy; it has been ruled out because of the decision of the Malacañang.

After further investigation, PMA submitted their final report to the palace. President Benigno Aquino III, the Commander-in-Chief, affirmed on the PMA and the AFP’s decision against Cudia. It was proclaimed that the PMA Honor Board was the one which considered Cudia’s fate and finally, publicized to let the cadet go.

President Aquino gave a speech for Siklabdiwa (Sundalong Ikararangal ng Lahing Bayani sa Diwang Wagas) Class 2014 during the PMA graduation giving emphasis on the honor code of the academy to which should be the basis of every graduating cadet’s way of life and serving the government.