This July 21, Monday has been a celebration-worthy and historic date for the Philippines especially to those who are members of the Iglesia ni Cristo (INC). Just in time for their 100th founding anniversary for this year, 2014, they open their own humongous coliseum—the Philippine Arena. It is one of their biggest highlights of the church’ centennial celebration on 27th of July.

What pushes this project to several headlines not just in the country but all over the world even before it is done have surprised many people. Some of these humongous facts can be read below: 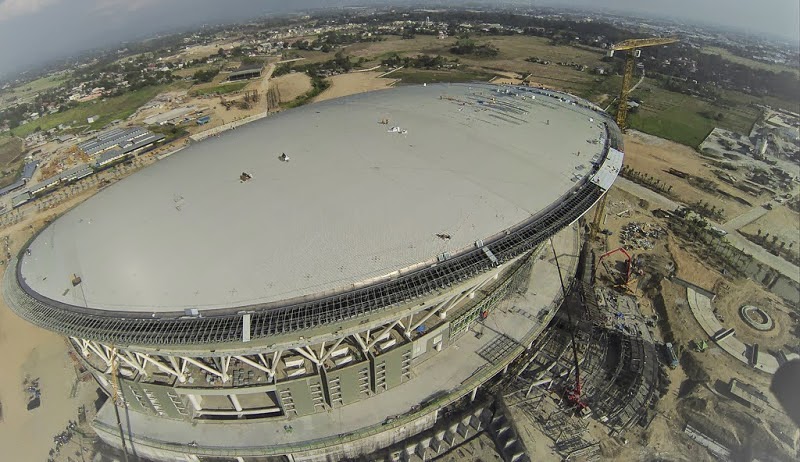 A) Size
Philippine Arena is the largest indoor dome ever made, not just in the Philippines but internationally.

The said arena can sit 50,364 people all at once, with 60,000 people that can be accommodated inside maximum! Doesn’t sound good enough for you? In comparison, the Philippine Arena is more than half the size of Mall of Asia Arena and Smart Coliseum. Normally, a coliseum would have 25,000 seats maximum.

Second to it in terms of the number of seats is the Gwangmyeong Velodrome located in South Korea which has 30,000 seat capacity.

Even Populous Andrew James called it “ambitious” and “unusual” because no one has ever done a half bowl design with such enormous capacity.

“The building’s capacity pushes the boundary of Arena design and will eventually establish itself as the world’s largest indoor arena. The form uses simple geometry to create an elegant appearance, while also giving the venue a powerful presence within its setting,” he said.

This 36,000 square meter dome has a roof which spans 160 meters and contains a staggering 9,000 tons of steel work (which was built as a separate unit to reduce the burden on the arena). Its height reaches to 62 meters or just about fifteen stories high.

Last year, Discovery Channel documented the construction of the dome highlighting its resistance against earthquakes or any seismic forces in the country. On the documentary, it was said that the Philippine Arena was “built with strength and flexibility”. The crowd mobility was also noted, making sure that there are enough exits and that the spectators inside can escape within 4 to 6 minutes during disasters and emergency situations.

C. Design
The humongous masterpiece owes its design to Populous, a global mega-architecture firm in Brisbane Australia. They made sure that the arena will enable at least 50,000 people to gather inside the building and 50,000 more to meet at a ‘live site’ or a plaza outside for major events. The initial design concept roots down to the Narra tree, the national tree of the Philippines and inspired by the root of the Banyan tree. Moreover, the roof was conceptualized to a Nipa hut.

It is a one-sided bowl with the lower bowl as the most frequently used part of the building. Its design allows separation of the lower bowl from the upper tier using acoustic and thermal properties. Another difference from the standard arena is the layout of the seats which resembles a Greek amphitheater, a semi-circle with seats at the sides and front of the stage. It is also divided by three sections into which colored by green, white and red—the colors of the Iglesia ni Cristo flag.

Despite the continuing criticisms to the INC church, it never stopped them from growing and building more and more churches. Iglesia ni Cristo Executive Minister Eduardo Manolo announced that non-members can use the arena with of course, the church’ right to prohibit activities deemed to be a violation to their beliefs remains. Who knows what more can they build in the future years? For this one though, hats off to them.