MH17 Crashed Down in Ukraine- Bodies, Still Being Recovered


On July 17, 2014; Malaysia Airlines Flight MH17, carrying 283 passengers and 15 crewmembers crashed down after being hit by a surface-to-air missile launched from an area controlled by Russian-backed separatists-- U.S. officials suspects. On Saturday, Malaysia Airlines released a flight manifest regarding the nationalities of the victims which includes 193 Dutch (including one dual Netherlands/U.S. citizen), 43 Malaysians (including 15 crewmembers and two infants), 27 Australians, 12 Indonesians (including one infant), 10 Britons (including one dual U.K./South Africa citizen), four Germans, four Belgians, three Filipinos, one Canadian and one New Zealander. 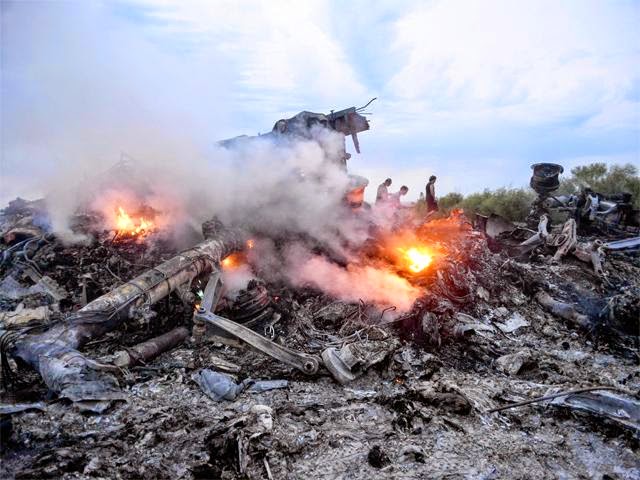 The separatists and Russia, however, denied responsibility from the accusations of shooting down the plane which was flying en route from Amsterdam to Kuala Lumpur. However, U.S. Secretary of State John Kerry said Sunday there was mounting evidence that a Russian-made missile, an SA-11, brought down the airliner. Also, the rebels are believed to have handed over the black boxes of the plane.

While the area where the plane crashed is being investigated by the U.N. Security Council, President Obama at the White House called on Russia last Monday to get separatists to stop impeding the progress of the crash investigation and to allow the international experts to have free access to the crash site. He also said that the Russian President Vladimir Putin had a “direct responsibility” to lead the separatists to cooperate, saying that it is the least they can do given his direct influence on them.

Putin replied however, that the Ukrainian authorities in Kiev were reigniting fights with the rebels. He also said that his government was doing everything possible to allow the team of experts from International Civil Aviation Organization, a U.N. agency to investigate.

The Russian president stated, "We repeatedly called upon all conflicting sides to stop the bloodshed immediately and sit down at the negotiating table. I can say with confidence that if military operations were not resumed on June 28 in eastern Ukraine, this tragedy wouldn't have happened."

Tears were shed, prayers were offered and words of anger, distress, sympathy and mourn rained upon the television, newspapers and internet. Bodies are still being searched in the huge debris while four rail cars deliver the remains of more than 200 bodies. The rebels spent three days recovering the bodies and placing them in refrigerated cars while the international teams were kept at bay. After such, the investigation was turned over to international forensic experts.

The Netherlands has sent a Hercules transport plane, Tuesday, to the Ukrainian city of Kharvic to pick up the dead bodies of the victims. Dutch Prime Minister Mark Rutte in the Hague said,"It is our aim — and at the moment our expectation — that sometime tomorrow [Wednesday] the first plane carrying victims will leave for Eindhoven.”

Malaysia Airlines has not yet recovered from the mysterious disappearance of Flight 370, and yet another incident took place. Both tragic events claimed 537 people from different countries in all, bringing devastation to their families and a very big dent to the company.