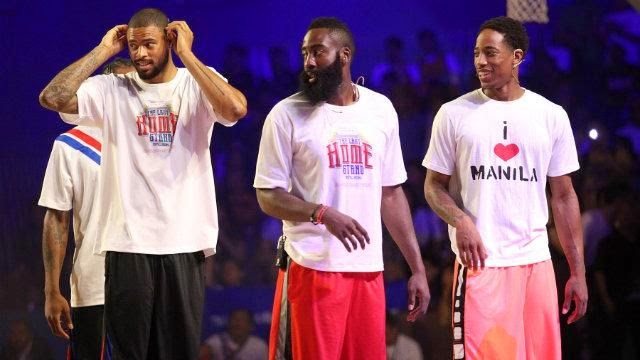 However, the players were told that they could be fined by the NBA for taking part in unsanctioned game just 2 hours before Tuesday’s game which resulted to the cancellation of the supposedly 5-on-5 gameplay.

Gilas head coach Chot Reyes said, "The players got worried, they got scared (because of the suspensions and fines).”

Instead of the charity event containing three-point and slam dunk competitions and the much-anticipated scrimmage; it all went down to practice drills and workouts. Moreover, it was also announced that the biggest draws Los Angeles Clippers' Blake Griffin and Indiana Pacers' Paul George wouldn't be participating because of “urgent personal matters."This, of course, left many fans dissatisfied and left the court with series of boos having bought tickets with prices ranging from 750 php to 23,300 php.Ariel Fermin, PLDT Home Executive Vice President and Head for Home Business stressed the charitable cause of the event which boiled agitation and more annoyance from the shocked crowd.

“We at PLDT would like to apologize to the Filipino fans for having disappointed them. It was a sudden turn of events and we, ourselves, are disappointed with the way things developed contrary to our expectations," the company gave out their sincere apology to Filipinos who paid to see the exhibition game between NBA stars and Gilas.

What caused this total turn of events is the missed submission of the coordinators of the necessary permits needed to the NBA that would have allowed the both teams to play against each other, according to Espaldon.

PLDT, in return, offered refund to appease the fans’ reactions.

"Our responsibility is to the Filipino basketball fans. That's why it is a basketball clinic but we clearly appreciated the expectation that there would be a 5-on-5 or a game, the sort that follows a clinic, which much is clear to us,” MVP explained, “I think there should be no mincing of words here. And clearly we created that expectation and perception. So our job as PLDT is to be accountable for that perception that's why there's an offer for a refund."