A knee was knelt. A proposal was asked. And to the couple’s joy and to the fans’ excitement, a yes was proclaimed.

August 9, 2014 marks the last day the Primetime King and Queen, Marian Rivera and Dingdong Dantes end their relationship as boyfriend – girlfriend and starts as being fiancé – fiancée. In the episode of Marian’s show, they proved their love and publicly committed to each other forever.

Dingdong Dantes became a guest in Marian’s show. Giving her a bouquet, he asked Marian to sit on the “hot seat”. He expressed his admiration, saying he keeps getting surprised with her daring dance routines.
scroll down for video. 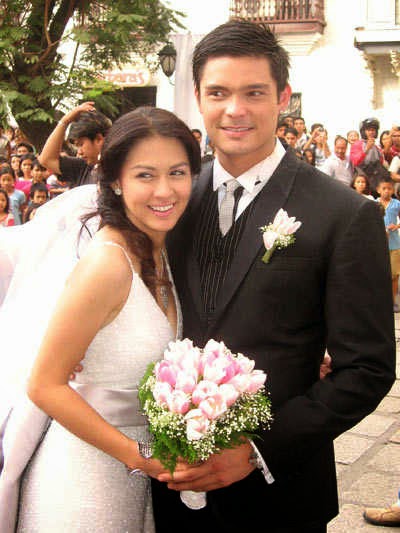 He then showed her a series of photos from Instagram with Marian explaining each one. It showed Marian with her friends, her siblings and her dad. There were also pictures of her and her loved ones on the set of Amaya. Photos of them were also in the presentation, and memories were recaptured and remembered once again bringing them both almost to tears.

Recalling his birthday in 2012, when he took Marian to a butterfly dome in Macau and asking the presentation to be paused, he said:

Dingdong was kneeling and Marian was crying as the song “Kahit Maputi Na Ang Buhok Ko” was playing.

He continued: "I have been praying na sana bigyan nya ako ng makakasama ko sa kalokohan, kasiyahan...isang taong kasama kong mangarap. Isang taong maibibigay ko ang lahat sa kanya. There's nothing else I want to ask for but to settle down and have a family. May isang bagay na malinaw sa akin. It's that I wanna spend the rest of my life with you." (I have been praying that [God] will give me someone to accompany me to mischiefs, happiness, a person dreaming with me. A person I can give my all. There is one thing clear, It’s that I want to spend the rest of my life with you.)

He then referred Marian, the answer to his prayers. He brought out a ring. “I offer you this gift on your birthday. But something (else) that's beyond any material thing - that's beyond any tangible gift. I offer you myself, my love, today, and all the days of my life. So please, Marian. Uy, serious ito (He noted his laughing girlfriend's expression). Please, Marian, will you be my wife," he proposed.

"Ladies and gentlemen, I proudly present to you my fiancée, the birthday girl, in her last dance with me before we become one. The soon to be Marian Gracia Dantes."

Marian then replied, “I know that there are many women in the world but I know I am the only woman you love so much.”

She also said she does not care how many kids Dingdong wants.

It was indeed a romantic episode. From the GMA Primetime series, MariMar to Endless Love and My Beloved; the love team has amassed a huge number of fans in the country. The romance didn’t just blossom on set but in their respective lives too.


With that, the fans await the date of their wedding and finally see them off to a happy ever after.