“If you are a mountain, then I’ll be the trees

Hug you and keep you from getting cold

If you are a car, then I’ll be the roads

If you are the moon, of course I’ll be the stars

Be by your side, keep you from getting cold

Even during moments of worry, I’ll be close.” 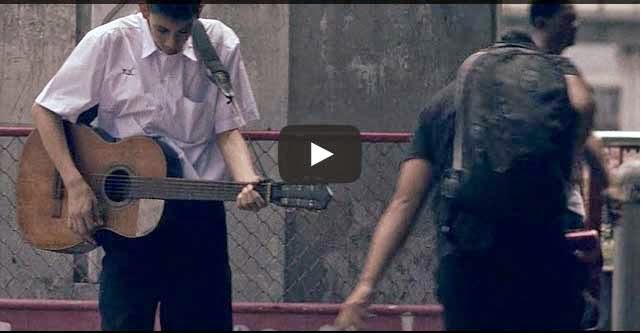 Every word was heavy; every pluck of the string vibrates throughout. It was not a popular song, but it was a song he knows best for he wrote it.

Music can create new friendships. Music can help us to love, help us to cope up when it seems that we can’t love anymore. Or to love again, even.

To Nut, just another boy in a school in Thailand, it is something different.

One could say, he isn’t really something special. In fact, no one knew he could even play guitar until he brought his instrument at school. To the boys in the band who noticed him, the melody he creates from 6 strings was considered weird. Sometimes, he is even jeered at.

However, despite the fact that he is alone, he is actually noticed by another two students of the same school. They saw him on the streets, laying out a card board, his case guitar on the ground open serving as a “money box” to whoever would give him money.

It turns out; Nut was actually raising funds for her mother who is confined in the hospital because of cancer. He has performed in train stations and streets; saving the money to help.

One of the two approached him, told him the sound coming from his guitar is weird. Asking Nut to let him tune it, it wasn’t expressed in words, but with music, a friendship was made. The three gave the song another soul—one was pounding on the beat box, two was singing and strumming the guitar.

“Because you are a gift from heaven,

I will take care of it; prevent anyone from harming you;

Because I will be standing right here, loving you till my dying breath;

He would sing to the people, dedicating the song to his mother. As the voice trails off in the air, his love echoes in the heart to those who have felt it.

Music is something universal. Sometimes, we find our own peers with our taste in music. It heals, it breaks and it resonates.

To Nut, it was his expression of love for his mother.